In my last blog I introduced Charlie.  Our golden boy.

When Charlie was around 18 months we considered whether he would benefit from having a canine friend around the house.  He was getting very attached to us – not a bad thing at all but I did worry that he was becoming more human than dog!   He did not want to leave my side. He watched every move I made.  Was he bored?

We took a trip to the local dog sanctuary to take a look at the lost dogs in their care.  There were over 129 dogs and the numbers continued to grow each day.  We asked to take 3 of the dogs out for a walk to see how we all got along.  We chose three similar looking dogs to Charlie and off we went.  Please don’t get me wrong, they were perfect dogs.  But..they were not Charlie or nothing like.  It just did not feel right with each one of the lovely boys we walked.

As we returned from our last walk we began to head for the door when we notices 7 or 8 puppies in a cage.  As puppies do, they were all scrambling to get to us.  All except one.  He was a white and beige pointer cross pup that sat in the corner and looked really sad.  I had seen that look before 18 months ago!  John and I just looked at each other and knew immediately that we wanted to take him home.  But…. we needed to seriously think about this as it was a big step for us.  He was a puppy, not housetrained and would need quite a lot of attention.  I knew we would be back and true to form we returned to the sanctuary an hour later.  Discussions had been had and a decision made – end of.

We took Charlie with us this time, just be be sure.  Both boys greeted each other as if they were long lost brothers.  The pup was thin and obviously had had a bad start to life.  His fur was starting to grow back in patches on his back.  We were informed that he had been fighting for life for most of his 6 short months in this world.  The sanctuary had been in no doubt that he would not survive but he did.

Once home we decided that this new pup was a Barney.  Barney was at home immediately and Charlie took to showing him around and even gave Barney space to explore Charlie’s bowl and bed which surprised me.  4 years on and they are best of friends.  They go everywhere together and share everything.  Well, almost everything.  Charlie will not share his chew bones.  Not with ANYONE.

Within the first 18 months, Barney needed two hip operations which was a result of his bad start in life.  His pain must have been so great.  He suffered in total silence.  The only tell tale sign was his walk, sluggish movements and his head was often hanging low.  We 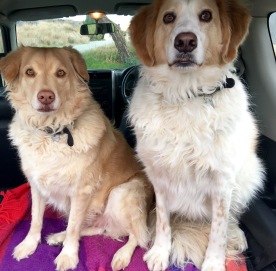 do not know what actually happened to him but it must have been terrible. 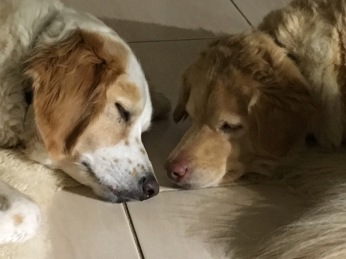 Barney’s favourite toys are usually the soft cuddly ones.  Take a look at his first soft toy which is still his favourite today by clicking on the link below.

He is now secure in his own environment but still remains very wary to the point of being scared when out of his comfort zone.  If he spots a car in the street that is not normally there, or a person at the top of the road, then he begins to panic and wanting to head home. He is the softest and most lovable dog ever and certainly did not deserve such a bad start to life.  We continue to love him and share our life with him and so does Charlie.  Barney is, and always will be, a working progress.  Bless him.

2 thoughts on “Then there were two!”

We aim to have our rental cave open by….